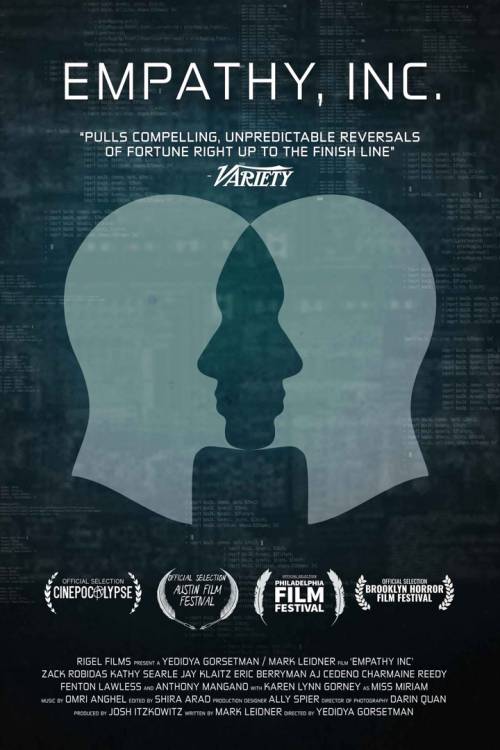 Joel finds investors for a new technology known as XVR. Xtreme Virtual Reality offers the most realistic and moving experiences for users by placing them in the lives of the less fortunate. Joel soon discovers that the tech's creators have far more sinister uses in store for their creation and that the reality it provides its customers isn't virtual.

“Pulls compelling, unpredictable reversals of fortune right up to the finish line.”  -- Variety

“Brilliant. There are a few films at Cinepocalypse this year that feel inspired more by “Black Mirror” than traditional horror and the best of those that I’ve seen is Yedidya Gorsetman’s Empathy, Inc.” —rogerebert.com

“Takes one futuristic concept, gives it a clever twist, and rides it out to its smart conclusion.”—The A.V. Club

“Intense… will absorb you right from the beginning” —Dread Central

“The film’s concept is genius, both in the grand ideas and the simple execution”—Film Pulse

“A triumph of independent cinema”—Nightmare on Film Street

“Sophisticated on all levels”—Reel Chicago

“Complex and anxiety-inducing”—Voices and Visions

“A very curious film that requires our full attention”—Terror Weekend

“Not to be missed“—Lackey on Film